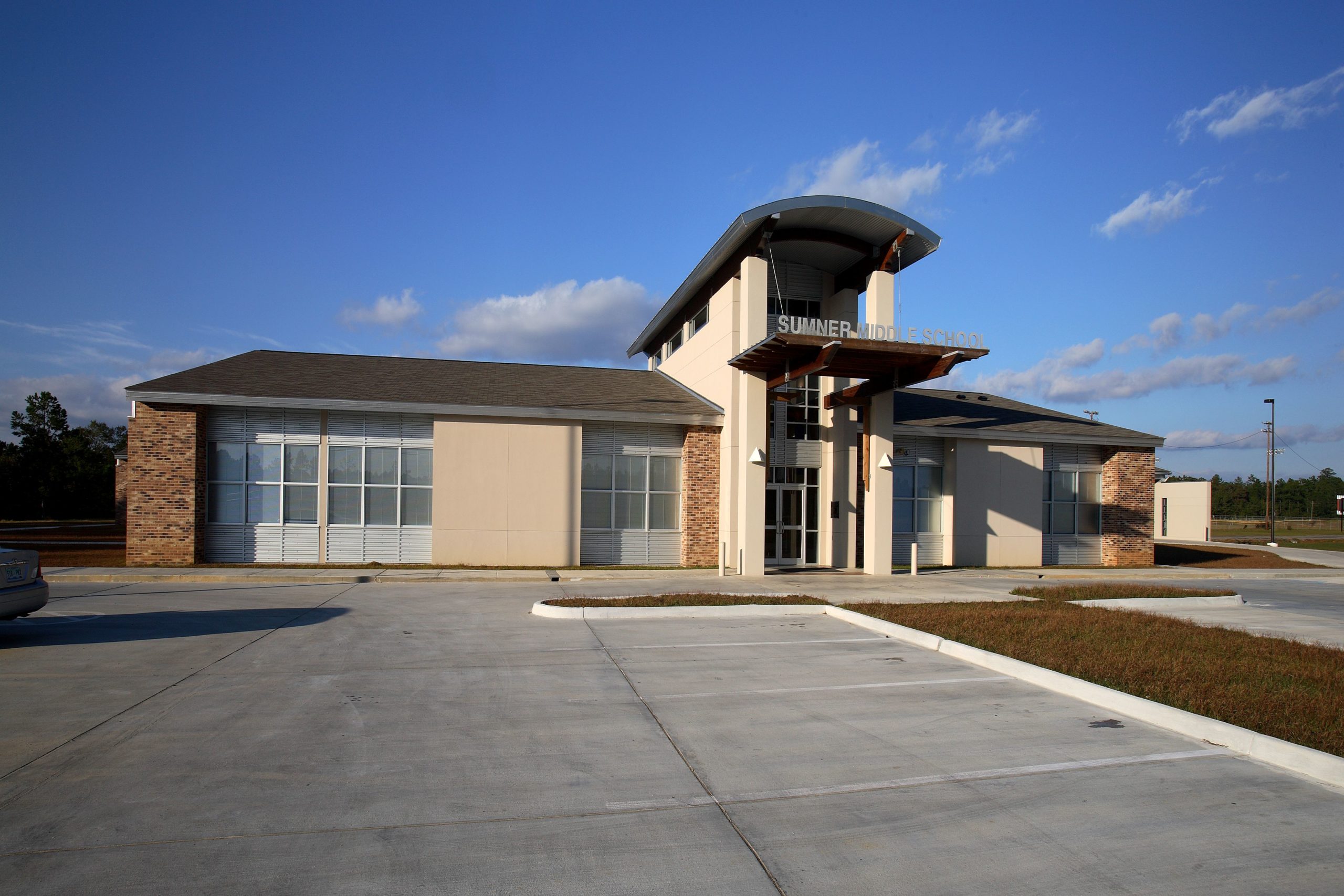 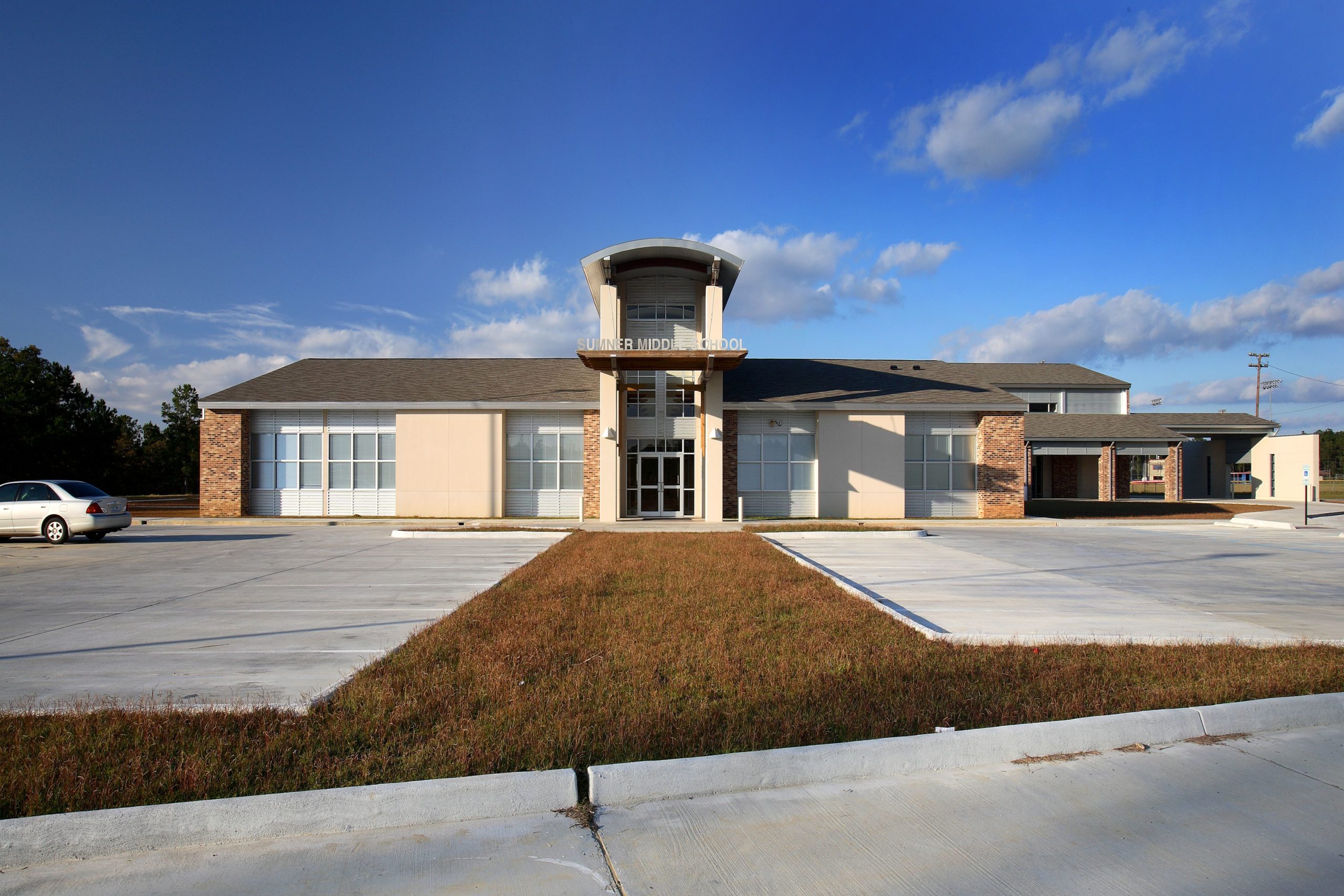 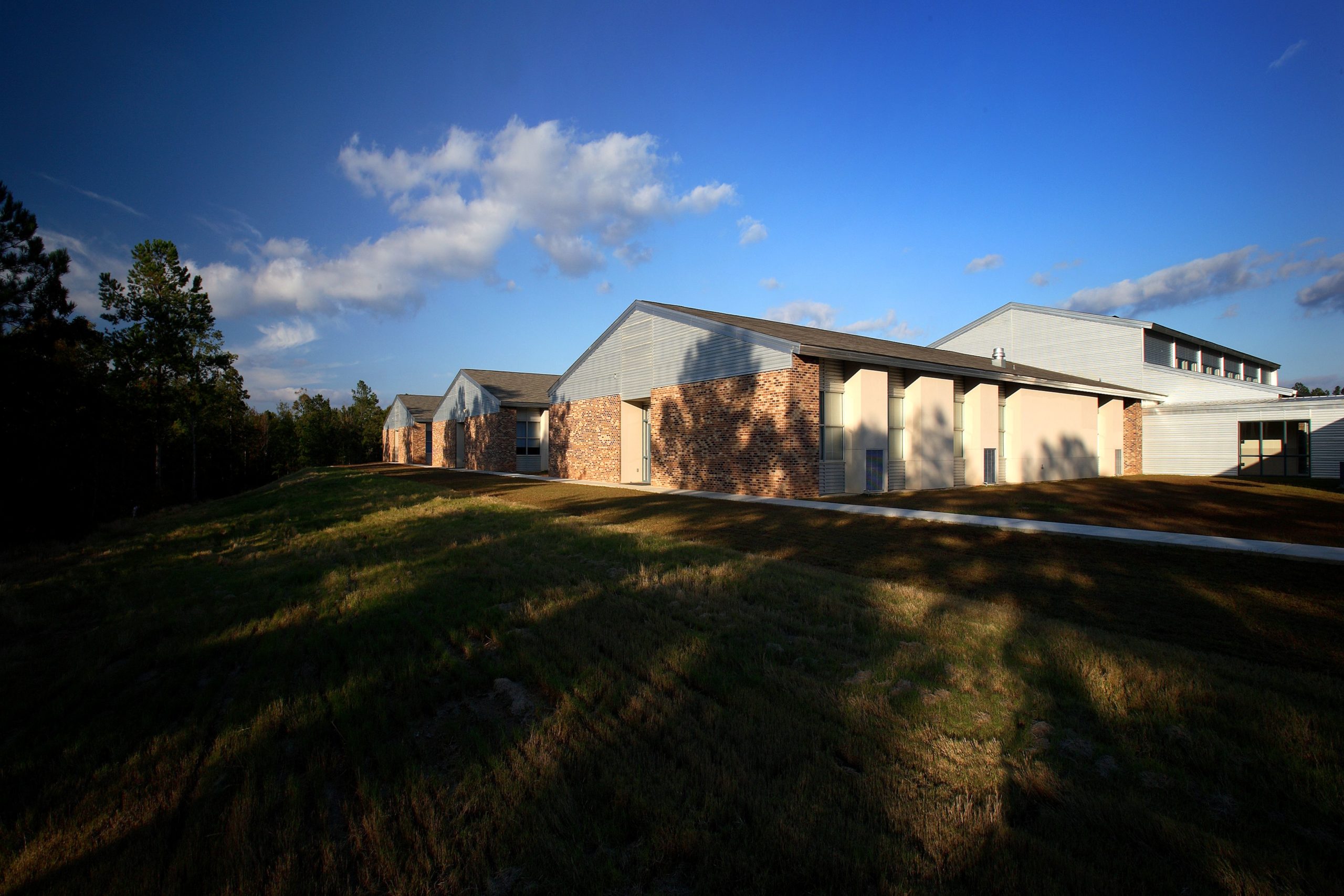 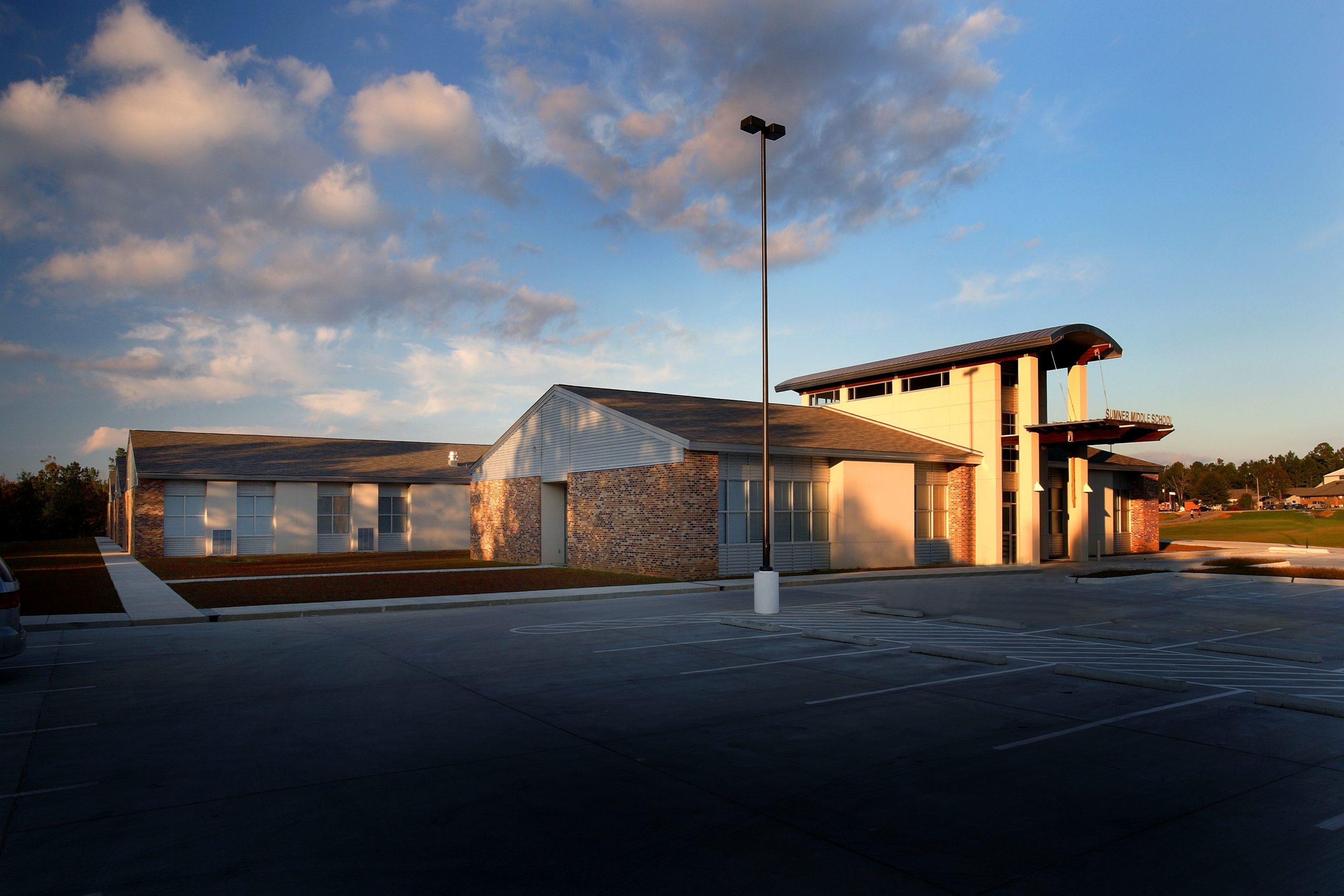 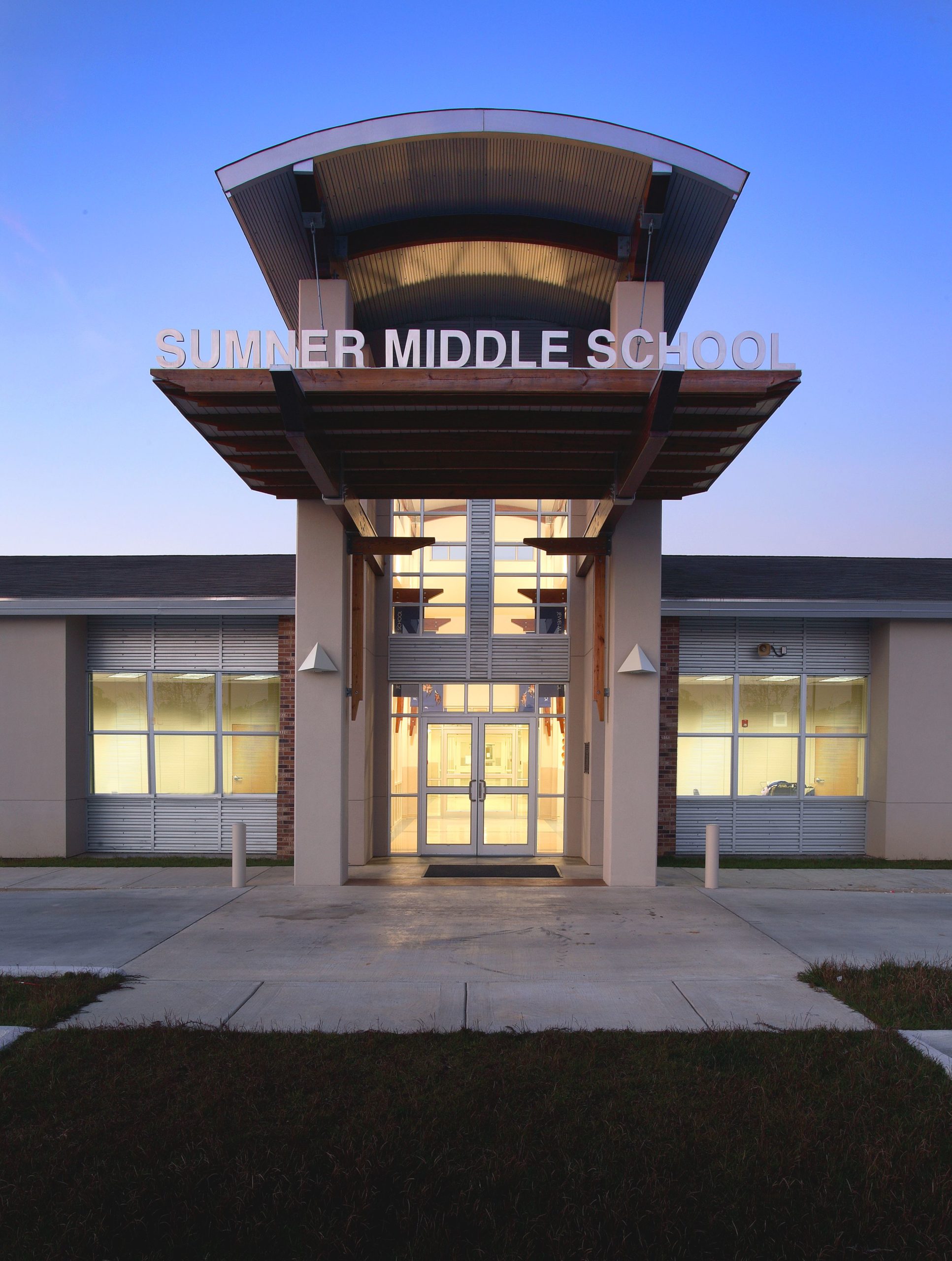 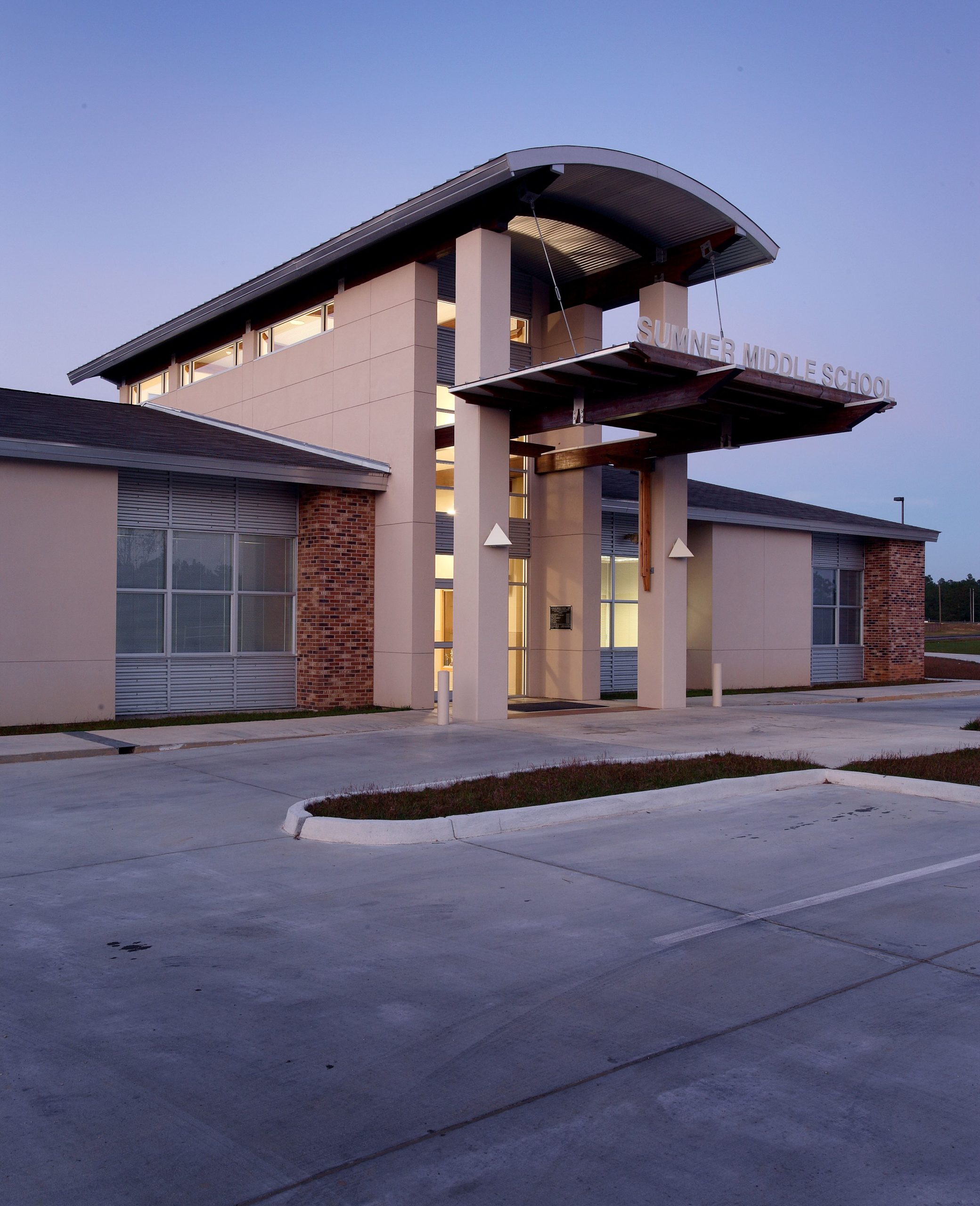 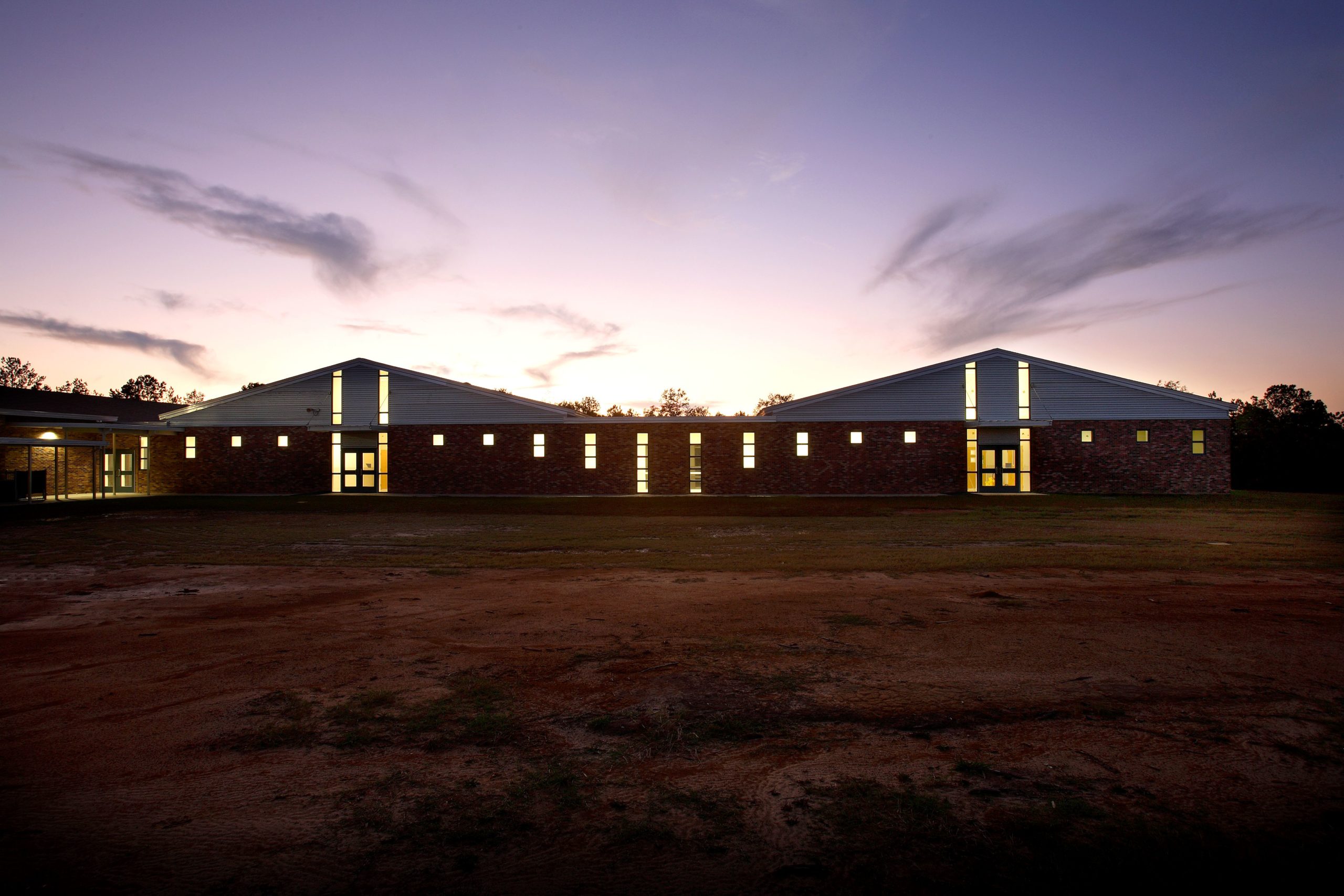 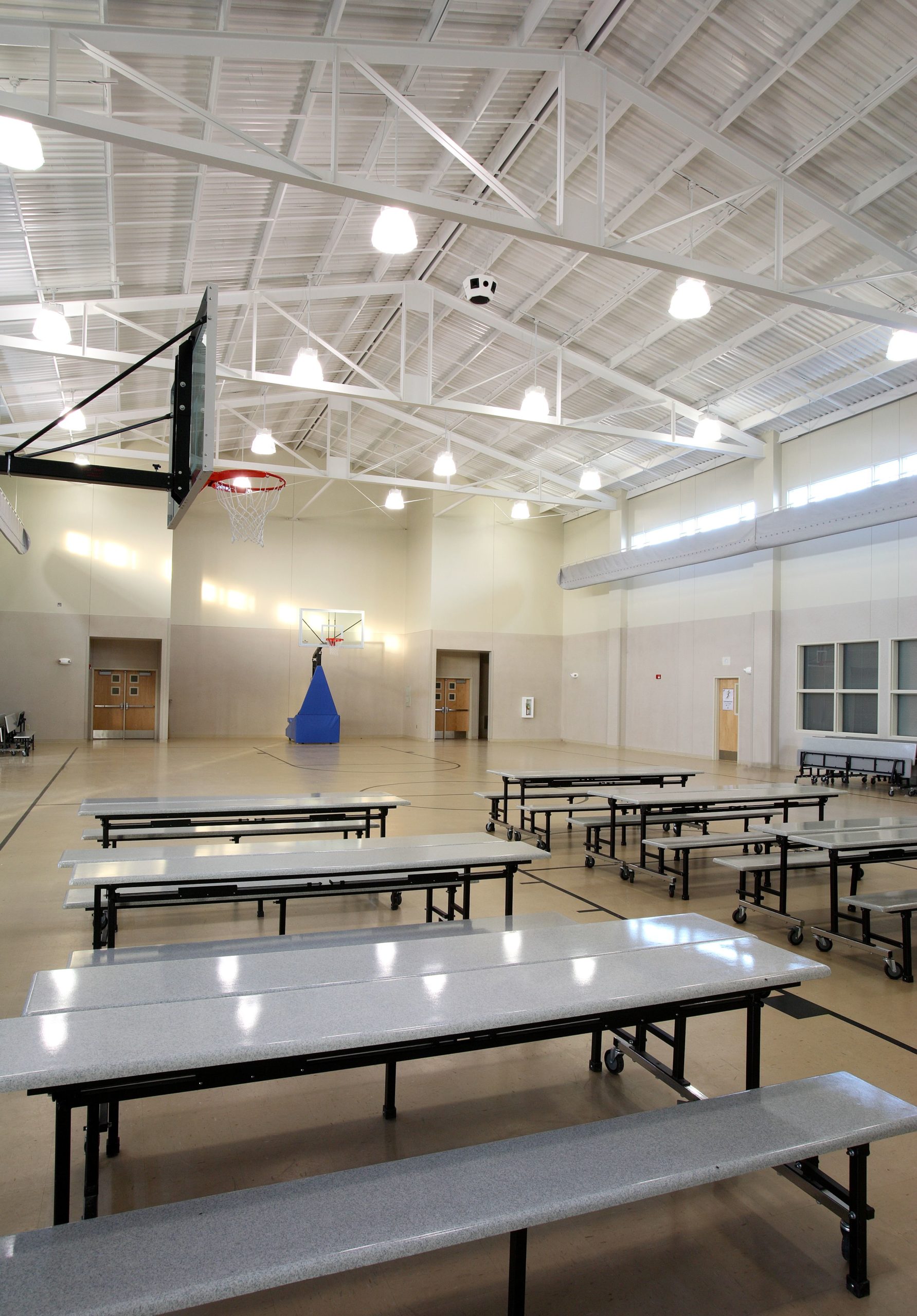 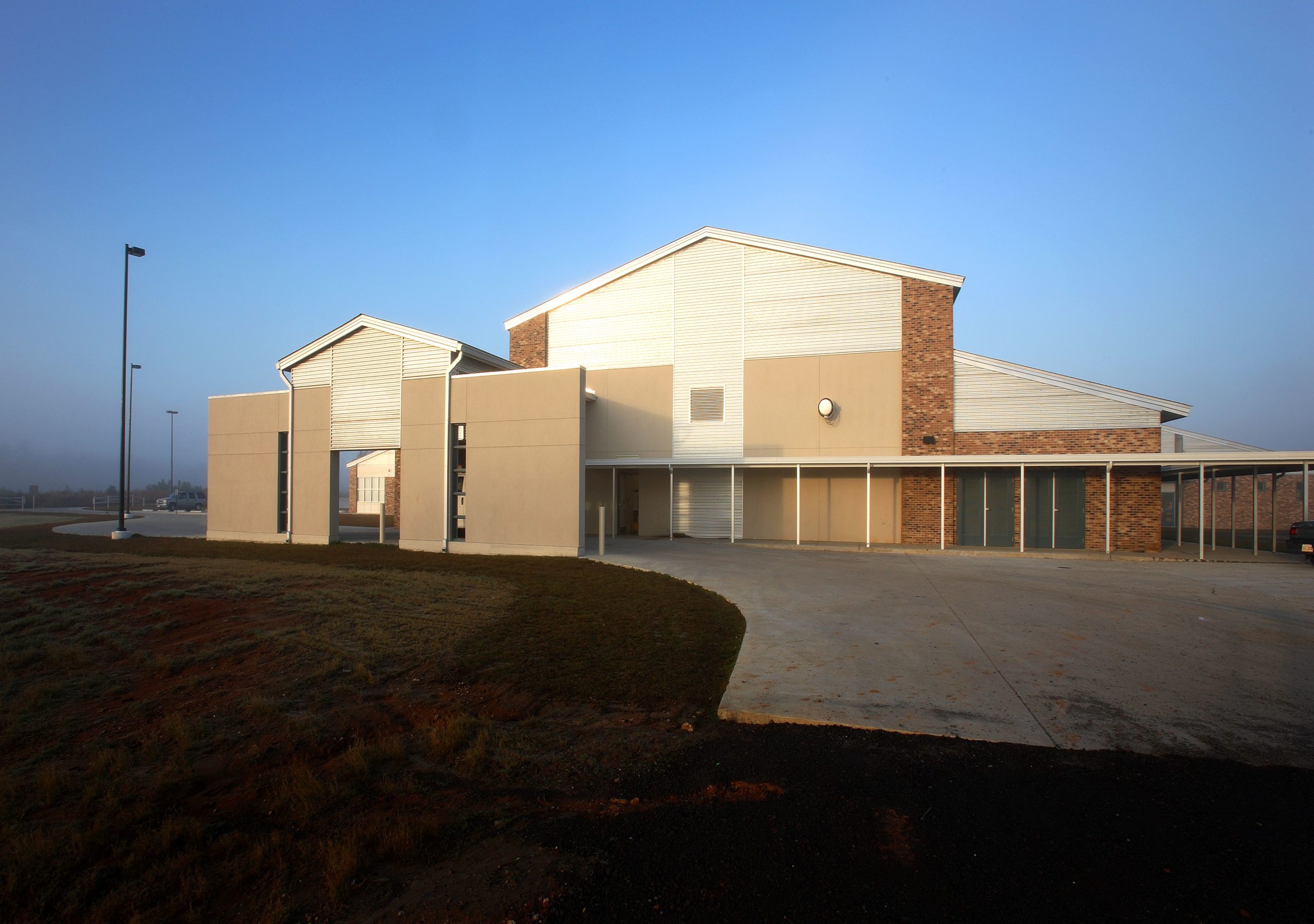 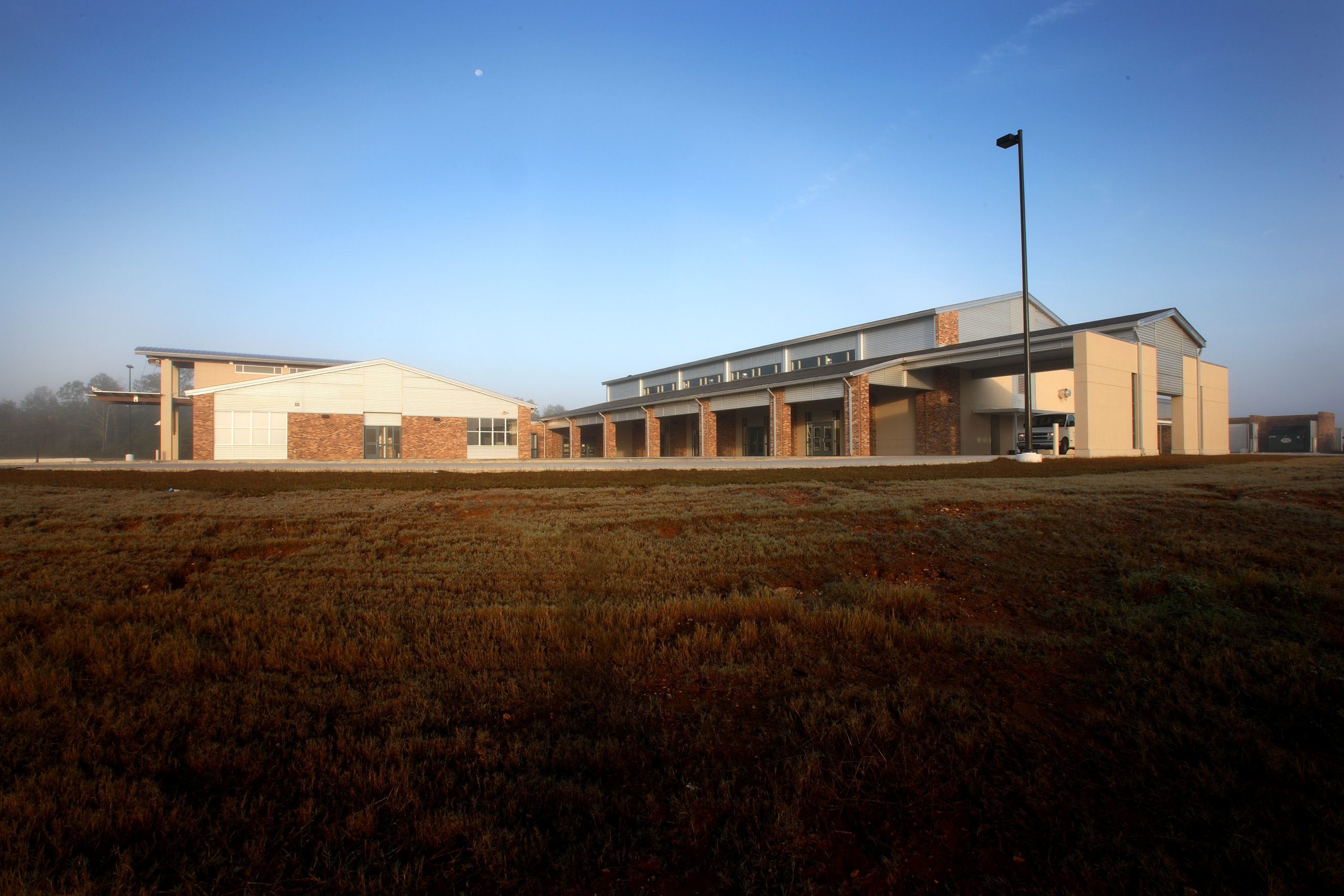 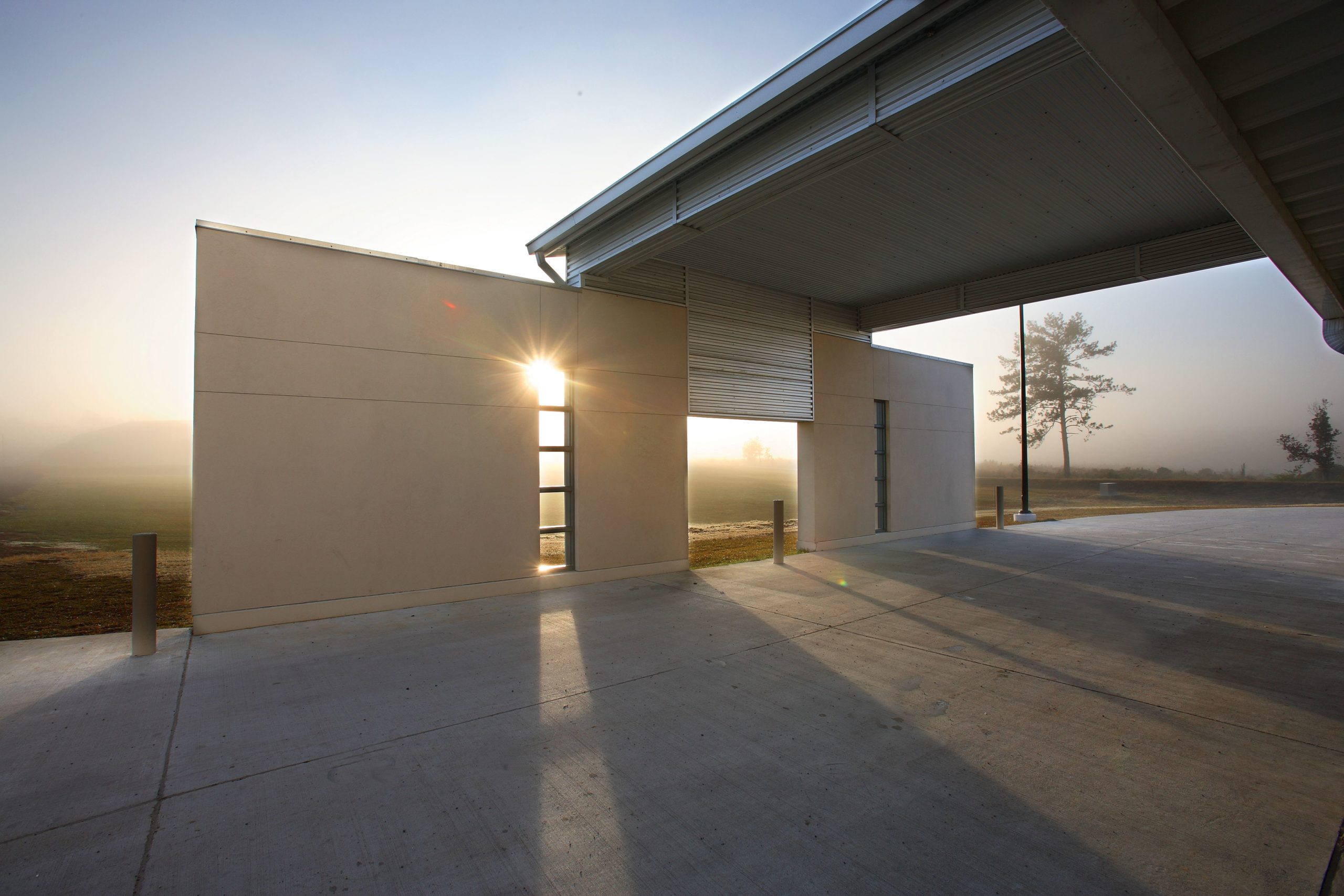 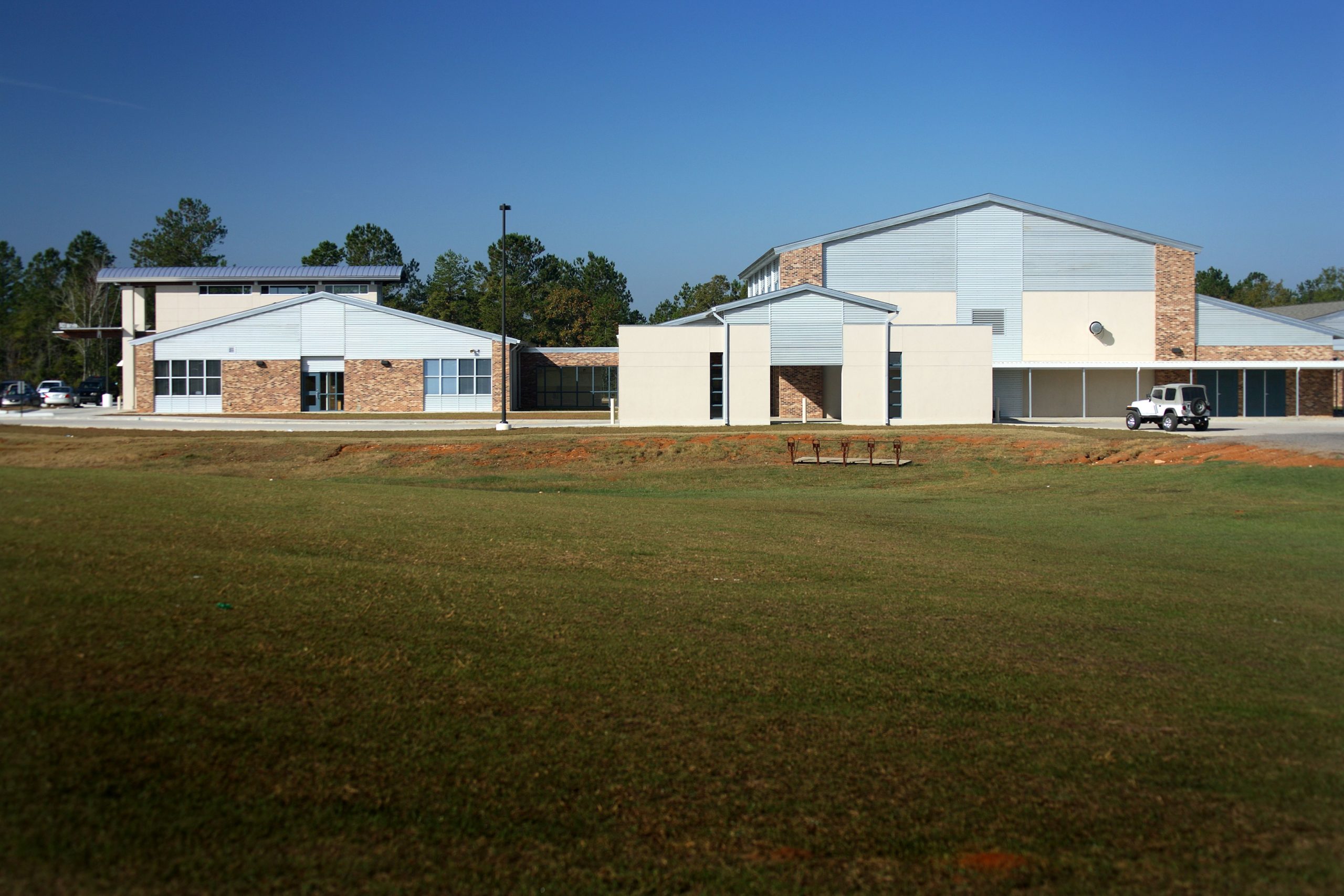 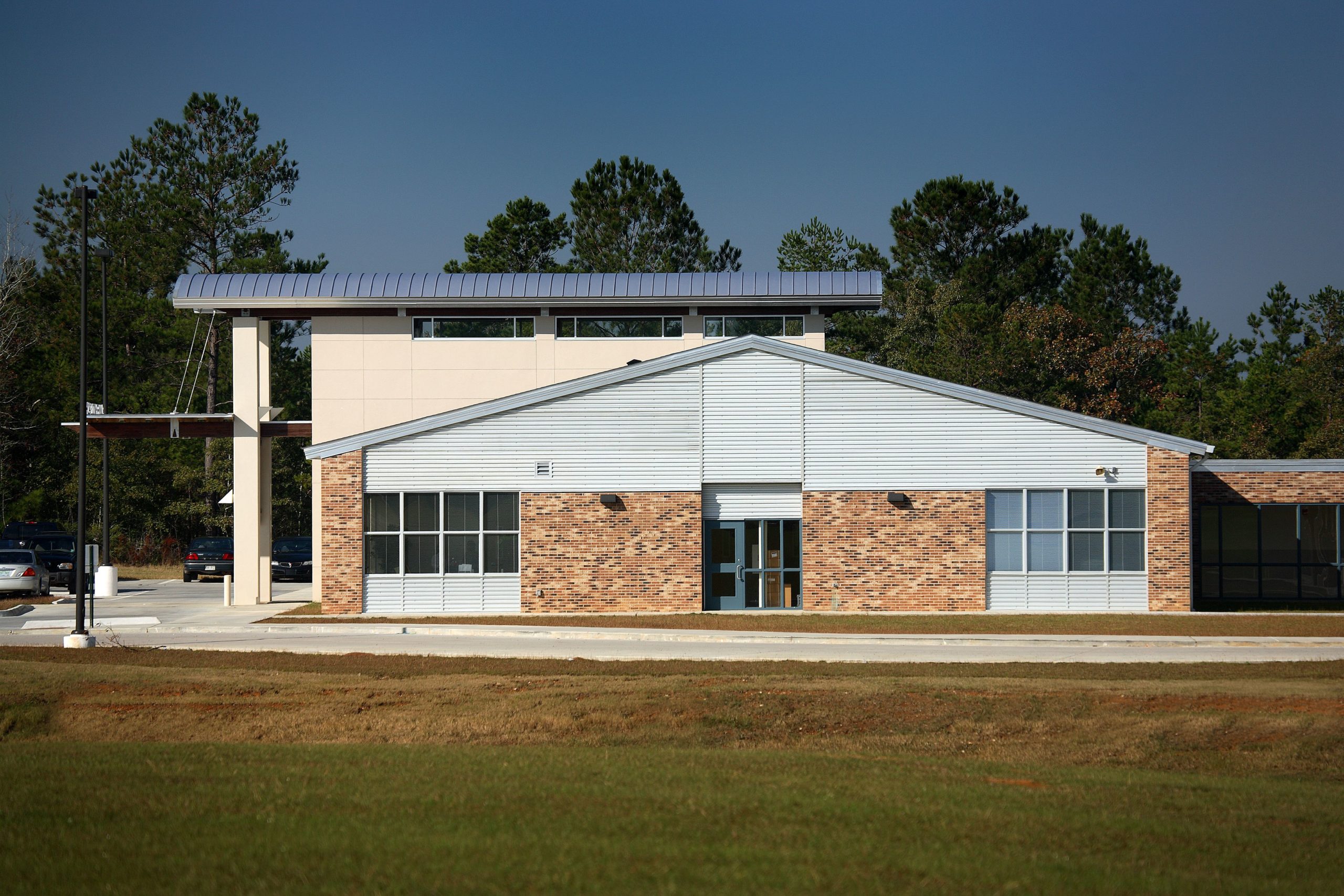 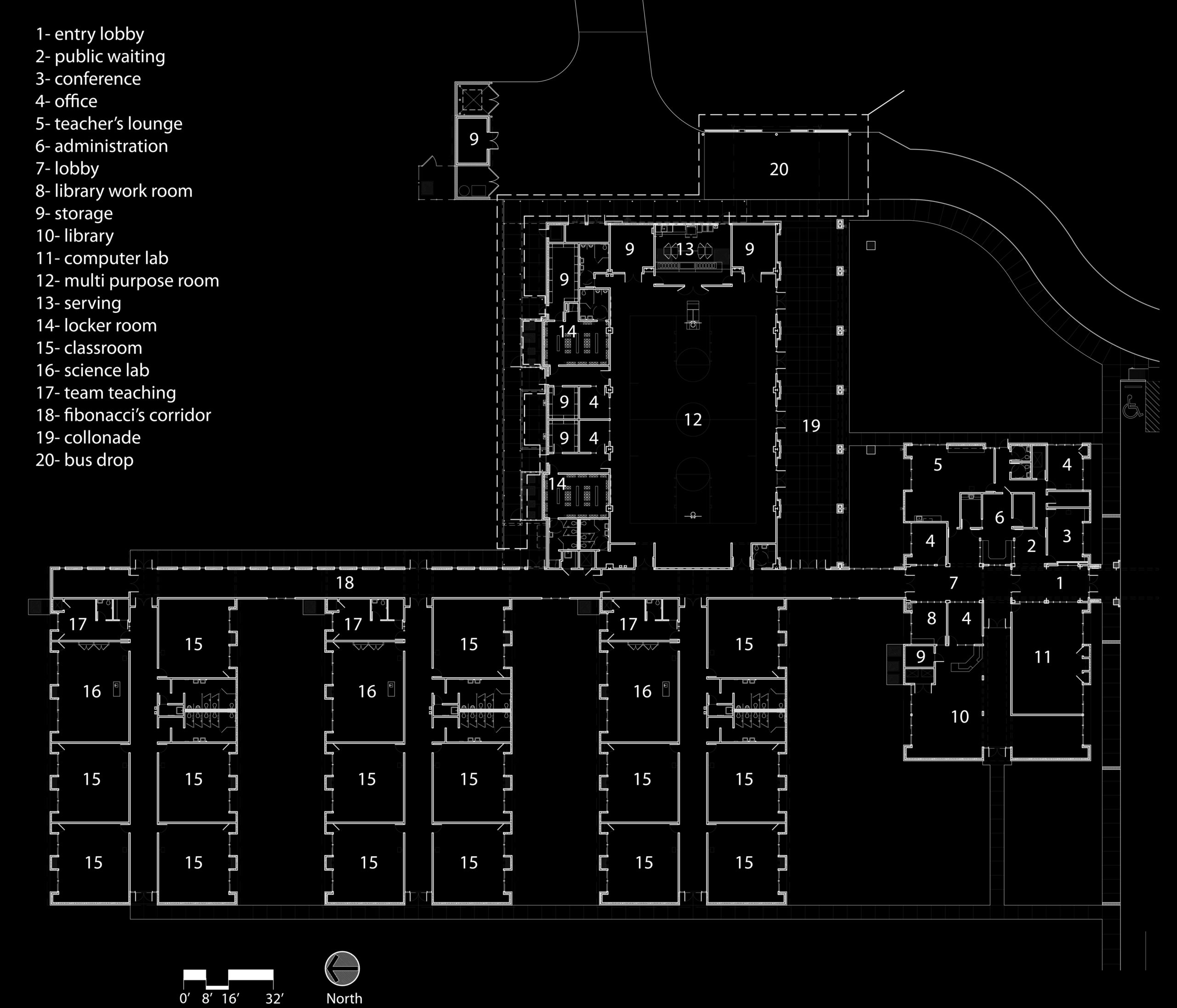 A new facility on an existing campus containing:administration, multipurpose room, library, locker rooms, computer lab, serving area, 15 classrooms, 3team teaching rooms, 3 science labs. The Tangipahoa Parish School System was in need of a new school building to house three grade levels of middle school aged children in the town of Kentwood, Louisiana. A long narrow, dramatically contoured site had been obtained directly west of the current high school presenting the opportunity to share infrastructure and resources. The facility was required to separate the grade levels while allowing utilization of the gym, library, computer lab and administration. The client also requested that the facility be organized in a manner that allowed for easy monitoring of the activities and safety of the students. The design team decided that it would be important to incorporate design cues in the form of materials and structure from the existing high school campus. This created a more homogenous and balanced environment.The visitors and students alike are greeted with a protective entry canopy constructed of glue laminated timbers supported from the exposed wood beams making up the vaulted roof structure. The plan consists of four pods of differing functions. The first pod on the south of the property houses the administration functions of the school. As you continue north down the corridor, the singular structure to the east is the multi-purpose pod. Here you will find a gym and associated spaces. With the proximity of the high school, the client decided that a single purpose cafeteria and kitchen was not needed. With this in mind, the multi-purpose room is equipped with a serving area and can perform double duty, having meals delivered from the neighboring cafeteria. The three wings off of the west side of the corridor contain classroom functions. Each pod contains 5 classrooms, a science lab, restrooms and a team teaching room. The narrow aspects of the site can be seen in the width of the administration building and entrance. Originally viewed as a weakness this ultimately developed into a design allowing for a single main corridor creating easy viewing from a single location of all activities within the common circulation. Asphalt shingles, stucco, dark stained beams and brick all come together to tie the new building into the existing high school. The brick was chosen for its similarities to the existing as well as being manufactured locally in Kentwood, Louisiana. Clear anodized corrugated metal panels were chosen to emulate the surrounding agricultural structures in a more refined manner. The Fibonacci Sequence was used as a playful way to relate the fenestrations to the varying heights of the students. This sequence, which is described as each number being the sum of the two preceding numbers, is also the basis of the well known Golden Spiral. While the windows may seem whimsical in location, they hint at a deeper mathematical concept for the children to explore.